A monumental and perhaps the most inclusive work ever on MCS and EHS.   Pelda B. Hyman, New York. 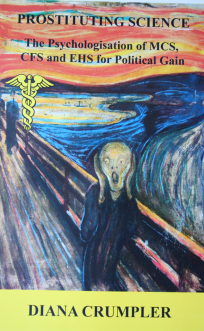 host of the non-communicable diseases that currently plague our society not simply as diseases of civilization but as by-products of that civilization’s reliance on chemo- and electrowizardry, Prostituting Science takes up where Silent Spring left off.

In addition to mustering a formidable assemblage of scientific data, Mrs Crumpler documents her own family’s descent into disabling Chronic Fatigue Syndrome (CFS), Multiple Chemical Sensitivity (MCS) and Electromagnetic Hypersensitivity (EHS) as a consequence of heavy pesticide exposure. Here, too, is all the evidence you’ll ever need to convince the sceptics that these are bona fide physiological disorders, as well as an effective treatment protocol for recovery.

As the title denotes, Prostituting Science also explores the paradox whereby the more that is known of a physical aetiology for these disorders, the more widely accepted have become allegations of psychogenesis. Within this context are also recounted gross abuses of the civil and human rights that other citizens of a representative democracy tend to take for granted.

Diana Crumpler trained as a teacher-librarian and taught in Victorian schools until 1984, when she was forced to retire due to ill-health. A career change was prompted by the eventual diagnosis of MCS and EHS. For the past 25 years she has been one of Australia’s foremost writers on MCS and EHS and the effects of chemicals on both human and environmental health. Her first book, Chemical Crisis, won widespread acclaim in Australia, North America and Great Britain.

For those who are interested in purchasing a copy of this informative book can do so by clicking on this link: PS order form on flyer