UPDATE – Smart Meters and the Federal Election – Where do candidates and parties stand?

Stop Smart Meters Australia and Citizens Advocating for a Safe Environment have received the following responses from candidates and political parties regarding the forced installation of smart meters in Victoria.

(See beneath table for further responses from candidates).

Rob Danieli, Katter’s Australian Party lead Senate candidate for Victoria said “The forced installation of smart meters in Victoria is wrong and completely goes against the core values and principles of our party.  Victorians should not be discriminated against.  We should have the same rights as other states to be able to opt out of the AMI [Advanced Metering Infrastructure] program. While the AMI program in Victoria is a state government initiative (but also promoted by COAG), if I am elected to the Senate, I will endeavour to support my fellow Victorians to stand up for their civil rights.  For various legitimate reasons, including health, privacy and safety, many Victorians are opposed to the forced installation of smart meters, yet they are being ignored by the two corporate-controlled major parties  If smart meters can be optional in other states and in other countries, why not Victoria?”  The Victorian Branch of Katter’s Australian Party has adopted a smart meter policy.  See attachment: Advanced Metering Infrastructure Reform Policy

Mark Farrell, DLP lead Senate candidate for Victoria said “The Democratic Labour Party and I believe that every person has the right to reject a smart meter on their property. This is based on:

c)     They give too much government control over power use.

e)     The current Victorian State Government before they were elected promised all Victorians that nobody would be forced to have a smart meter.

The DLP and I if elected will voice everyone’s concern and objections to the current roll out of Smart Meters.”

The following responses were also received: 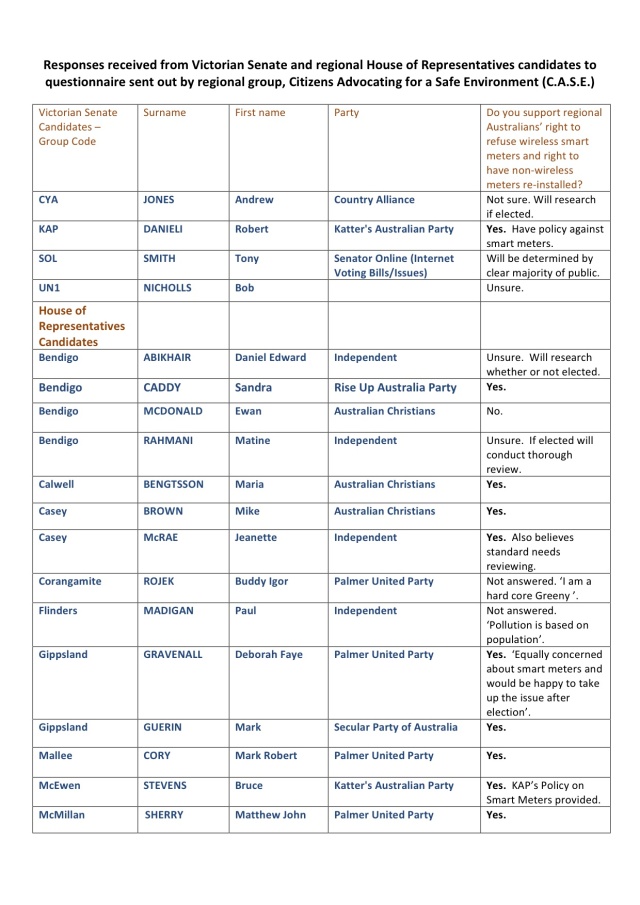 When contacted by one of our members regarding this issue Mr Cadar felt compelled to respond personally by ringing to discuss by phone.

He indicated he was against the roll out and it needed more investigation and he would do so if elected.

He knows of a colleague who has been affected by electromagnetic radiation from smart meters and has had to resign from his job so he has had first hand experience that this is a very real and serious problem and threat to Victorians and indeed all Australians.

‘in regard to the health ramifications, if elected as a Senator, I would ask that an investigation take place for all states that have smart meters.’

He doesn’t like the roll out. There would be further review if elected. He said that along with our members he does not want or have a smart meter.

Their party has not tabled a position on smart meters at this time.

‘We, the DLP, are on the public record of standing against the forced

installation of Smart Meters. We campaigned on this issue in the Niddrie

I’m dead against it and have blogs on it myself so shall respond asap to you..

‘I am totally opposed to smart meters, and would be seeking to stop

the distribution of such.

enforces people to be subject to the scrutiny of any regime that invades privacy and compels us to submit to the system.’

“The Greens have a proven track record of standing up for environmental issues.  I joined the Greens because of their rigorous evidence-based policies that care for people and care for the environment.

I am tertiary qualified, and respect the peer-reviewed scientific evidence-based research methodology that is used within academic circles to verify hypothesis.  However, I cannot find any credible evidence to suggest that EMR emitted from various electronic devices and infrastructure within our community presents such a significant risk.

I believe that these devices and infrastructure bring significant social and economic benefits to all. WiFi and Mobile Cellular technology has brought great digital freedoms to people.

Smart meters and appliances are the first step forward to the new clean energy revolution.

I trust the evidence-based rules and regulations set by the Australian Radiation Protection and Nuclear Safety Agency.  See more about their findings at http://www.arpansa.gov.au/radiationprotection/FactSheets/index.cfm”

36 Responses to UPDATE – Smart Meters and the Federal Election – Where do candidates and parties stand?