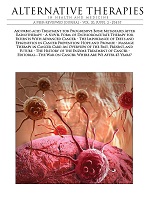 A 92 case series report by Melbourne medical practitioner Dr Federica Lamech titled “Self-Reporting of Symptom Development From Exposure to Radiofrequency Fields of Wireless Smart Meters in Victoria, Australia: A Case Series.” has been published in the Nov/Dec 2014 issue of the US clinical journal ‘Alternative Therapies in Health and Medicine’. The journal is a PubMed listed, peer-reviewed publication.

It reveals that the most commonly reported symptoms from exposure to wireless smart meters were (1) insomnia, (2) headaches, (3) tinnitus, (4) fatigue, (5) cognitive disturbances, (6) dysesthesias (abnormal sensation) and (7) dizziness; and that the effects of these symptoms on people’s lives were significant.

A draft of the report had already gained support from the American Academy of Environmental Medicine (AAEM) last year with a public statement by them that “It is a well documented 92 case series that is scientifically valid. It clearly demonstrates adverse health effects in the human population from smart meter emissions.”

Stop Smart Meters Australia is of the opinion that this report will help the global, international effort to better understand the effects of nonionizing radiation and of wireless smart meters in particular, on human health.

Dr Lamech ‘offers the hypothesis that some people can develop symptoms from exposure to radiofrequency fields of wireless smart meters.’ She concludes that ‘This hypothesis cannot be disproven without further assessment of the affected individuals and the electromagnetic fields in which they live.’ Dr Lamech calls for ‘the establishment of a postrollout surveillance study and funding for further research into the particular effects of wireless smart meters, in conjunction with research into the short-term and long-term consequences of EMR exposure.’

The PubMed listed abstract can be found here:

A comprehensive commentary on the report by SkyVision Solutions can be found here: http://smartgridawareness.org/2014/12/07/symptom-development-from-smart-meter-rf-exposure/#more-9615

The full article (which is copyrighted) can be obtained by purchasing an individual copy for $15 US from: https://www.scribd.com/doc/249193352/Self-Reporting-of-Symptom-Development-From-Exposure-to-Radiofrequency-Fields-of-Wireless-Smart-Meters-in-Victoria-Australia-A-Case-Series

Alternatively, individual hard copies of the Nov/Dec 2014 issue of Alternative Therapies in Health and Medicine can be purchased by e-mailing the circulation director at jbenson@innovisionhm.com.