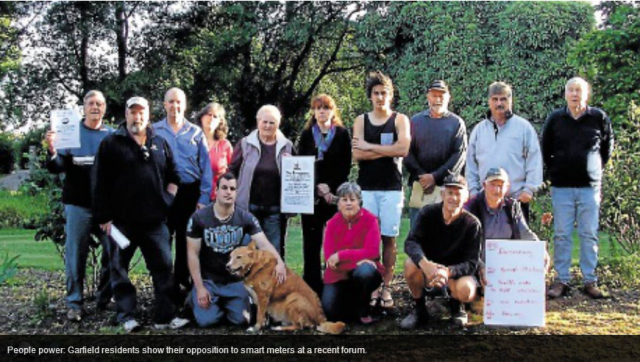 VIVIENNE Skeen says she will go to court if necessary in her battle to stop an unwanted device — an electricity smart meter — being installed on her property.

Ms Skeen, who lives in the Lakeside estate, Pakenham, has written to Premier Ted Baillieu, challenging him to tell her which law she is breaking in refusing to have one of the new meters. She is one of a small number of residents across Casey fighting the new meter rollout.

Despite assurances from the government and medical experts, opponents cite alleged health effects, including cancers, heart attacks and Alzheimer’s disease, from the meters. Some also allege breaches of the constitution and government intrusion into their property and lives.

She has a ‘Stop Smart Meters’ notice on her letterbox. Her meter box is padlocked, with a Perspex screen so the meter can be read. She also has a warning notice saying she does not give her consent for a smart meter to be installed.

“We live in a democracy — supposedly,” she told the Weekly. “We’re all being told it’s mandated that we have a smart meter. The mandate is on the power companies to use their ‘best endeavours’ to install one, not on us.”

Electricity distributor SP AusNet wrote to Ms Skeen last month advising it would be installing the new meters in her area.

She said that when she called to object, she was told that if she did not co-operate with the installation the police would be called.

“I rang Victoria Police and was told they have no record of assisting in the installation of a smart meter. The only reason they would attend would be to keep the peace.”

A spokesman for SP AusNet, Lyall Johnson, told the Weekly the company was not forcibly installing smart meters where householders had blocked access.

A spokeswoman for the Casey and Cardinia Smartmeter Awareness Group, Kate Everett, said the campaign against smart meters was “gathering momentum”, with about 20 Garfield residents attending a recent forum and a legal challenge to compulsory installation likely.