Despite many requests, Victoria’s Energy Minister Lily D’Ambrosio refuses to permit the removal of the communicating chip from a smart meter causing irrefutable suffering and pain.

“RESERVOIR retiree Sergio spends his nights in a cramped and freezing garage, surrounded by bird cages and old furniture.

Whenever he tries to sleep in his own bed he wakes up with pain, dizziness, and has difficulty talking.

Sergio said these problems started in 2013, shortly after a smart meter was installed at his home.

Testing determined the meter was within the current safety standard but Sergio and his wife Agatha believe he suffers from electromagnetic hypersensitivity (EHS) which affects his pace maker.

Sergio sleeps in the garage because it’s the furthest point from the meter on the property.

“The first night we slept in (the garage) it was like a paradise for him,” Agatha said.

The controversial condition isn’t recognised by the World Health Organisation, but is an increasingly common complaint.

The Australian Radiation Protection and Nuclear Safety Agency said there was no established evidence that smart meters caused health issues, but research was ongoing.

The most famous case of EHS was in 2013 when Dr David McDonald was awarded compensation after the CSIRO required him to work with electronic devices, giving him headaches and other health issues.

For two-and-a-half years, Sergio and his wife Agatha have been asking Jemena to temporarily remove the transmitter to see if Sergio’s health recovers without it.

Agatha said she offered to pay up to 12 months in advance and extra for any charges.

The company visited the house multiple times and initially put a mesh net on the wall with sticky tape and moved an aerial to the roof but Sergio’s health continued to decline. 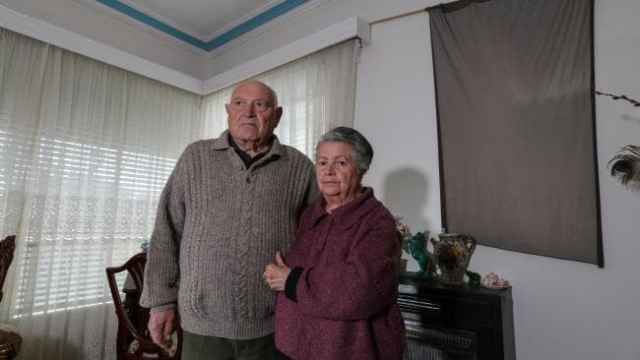 Sergio and Agatha Casagrande in front of the mesh net. Picture: George Salpigtidis

The ombudsman also concluded under current law, a smart meter can’t be replaced with a manually read version.

Now Sergio is seeking an exemption to the law through Energy Minister Lily D’Ambrosio, who visited the property in February.

Agatha said she was sick of the couple’s calls for help being ignored.

Ms D’Ambrosio’s office did not respond to Leader’s requests for comment.”

Does Minister D’Ambrosio have a heart?? The Victorian Labor Government promotes itself as “Putting People First” – Such dishonesty!