ALMONT — When the school district rolled out the Ipads this year, Aiden Fitchett noticed something new; as he did when seated near the wireless projector any time a teacher used one for a presentation: headaches. Bad ones. Bad enough that the 8-year-old second grader would come home crying from the pain.

His mom, biologist Rachel Fitchett, made a correlation between Aiden’s headaches and the circumstances: wireless fidelity waves or WiFi, which has been associated with causing physical effects in a small percentage of the population.

“I knew the health risks associated with WiFi and asked the teacher to relocate him and the headaches stopped,” Rachel says.

While that was great, the situation still puzzled Aiden’s inquisitive mind. So when Science Fair time rolled around he knew exactly what he wanted to delve into.

“I want to know why I get headaches when I’m around wireless devices but not the wires,” Aiden says. “We use a laptop at home, and we have a television set, and it’s only around wireless that I get the headaches.” 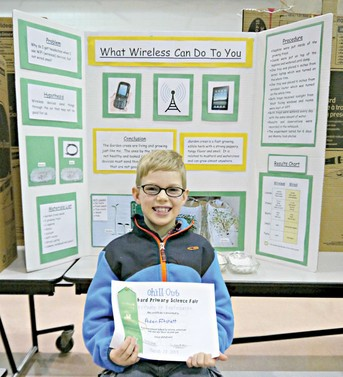 Aiden Fitchett with his Orchard Primary School Science Fair project ‘What Wireless Can Do To You.’

So Aiden set about to answer his question. Patterning his experiment after a Danish experiment by a group of 9th grade students, Aiden and his mom bought some garden cress seeds, growing trays and napkins and got to work.

Aiden placed an equal amount of garden cress seeds atop two napkins, which he placed inside two growing trays. Each was watered until damp. One tray was placed six inches from a wired laptop which was kept on the whole time.

The other tray was placed six inches from a WiFi router in a neighbor’s home which was turned on the whole time as well.

Both trays received sunlight from west windows, and both rooms were kept at 69 degrees. The trays were watered daily with the same amount of water.

After six days, the results—similar to those in the Danish experiment—were stunning.

“At first Aiden was excited as the seeds started to grow, but by the second to the last day one of his notations on the WiFi sprouts was ‘strange,'” Rachel says.

In the Danish experiment, the cress seeds placed near the WiFi device did not sprout at all. While Aiden’s WiFi seeds sprouted, they did not look anything like the robust sprouts growing in the wired room.

The sprouts tasted different as well. Garden cress is a fast-growing herb with a peppery, tangy flavor and smell. The wired seeds tasted strong and peppery—so much so that Aiden had to run for a glass of water. The WiFi seeds had little taste at all. In fact, Aiden said they tasted “like water.”

“The garden cress are living and growing just like me,” he says. “The ones by the WiFi were not healthy and looked crazy. Wireless devices must send things through the air that are not good for my body.”

Rachel believes when the wireless signals are intensified by use of multiple devices, so is the negative effect.

“The more that are together, the more concentrated the ill effects are,” she says.

Aiden’s headaches continued during computer class, so he has since been pulled.

“He’s a very bright kid who excels in all subjects, Rachel says. “He doesn’t need to get whatever it is they’re getting in there.”

Along with Aiden, Rachel and husband Matthew are parents of Caila, 6, Levi, 4, and Eliniah, 21 months.