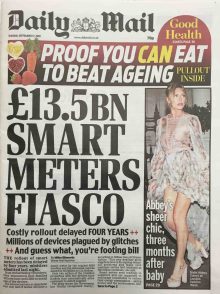 The rollout of smart meters has been delayed by four years, [British] ministers admitted last night.

In an embarrassing climbdown, they announced that families will now have until 2024 to install one of the devices.

The scheme has been so shambolic that only around half of homes will have a smart meter by the original 2020 deadline and the estimated cost has soared by £2.5 billion to £13.5 billion [AUD$24.8 billion].

Only two million of the 15 million properties with the devices have models that automatically allow customers to switch supplier.

Customers can refuse to have a smart meter, but firms face fines if they have not done enough to promote the devices. This has led to concerns that energy giants have resorted to ‘blackmail’.

Aggressive practices include limiting the best tariffs to those with smart meters. Households have complained of technical issues, with many saying their device had stopped working after switching supplier. Another common issue is broken display screens, which show customers their usage rates.

The Government initially said every household and business must have a smart meter by 2020. But it quietly backtracked on that pledge in the 2017 Queen’s Speech by saying the meters needed only to be ‘offered’ by that time.

The delay shows the Government has ‘finally recognised reality’, according to Gillian Guy of Citizens Advice. Mrs Guy added: ‘We’ve seen some energy companies use aggressive techniques to try to persuade people to have smart meters fitted as soon as possible to meet the existing timeline. We are pleased the Government is extending the deadline.’

‘It’s also apparent the cost of the rollout is escalating, and the public are picking up the tab through their energy bills.’

Abridged from the Daily Mail.